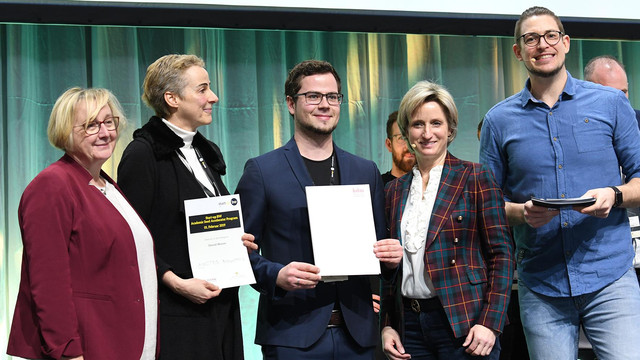 As part of the start-up BW Summit, the finals of the first „Start-up BW ASAP“ competition round took place. The „Academic Seed Accelerator Program Baden-Württemberg“ (ASAP) is a nationwide competition within the framework of the national campaign „Start-up BW“. Minister of Economic Affairs Nicole Hoffmeister-Kraut and Minister of Science Theresia Bauer jointly honored the winners at the Landesmesse Stuttgart.

The main prize in the finals of „Start-up BW ASAP“ and thus a prize money of € 1000 was awarded to the team AUCTEQ Biosystems from the University of Mannheim. AUCTEQ Biosystems is developing a growing bioreactor for cell cultures in biopharmaceutical production. The patent-pending bioreactor consists of a highly flexible plastic and adapts its size to the required volume of the cell structure. It combines up to eight manual operations in a single step, minimizing the risk of contamination, reducing plastic waste and significantly increasing the efficiency of the process.